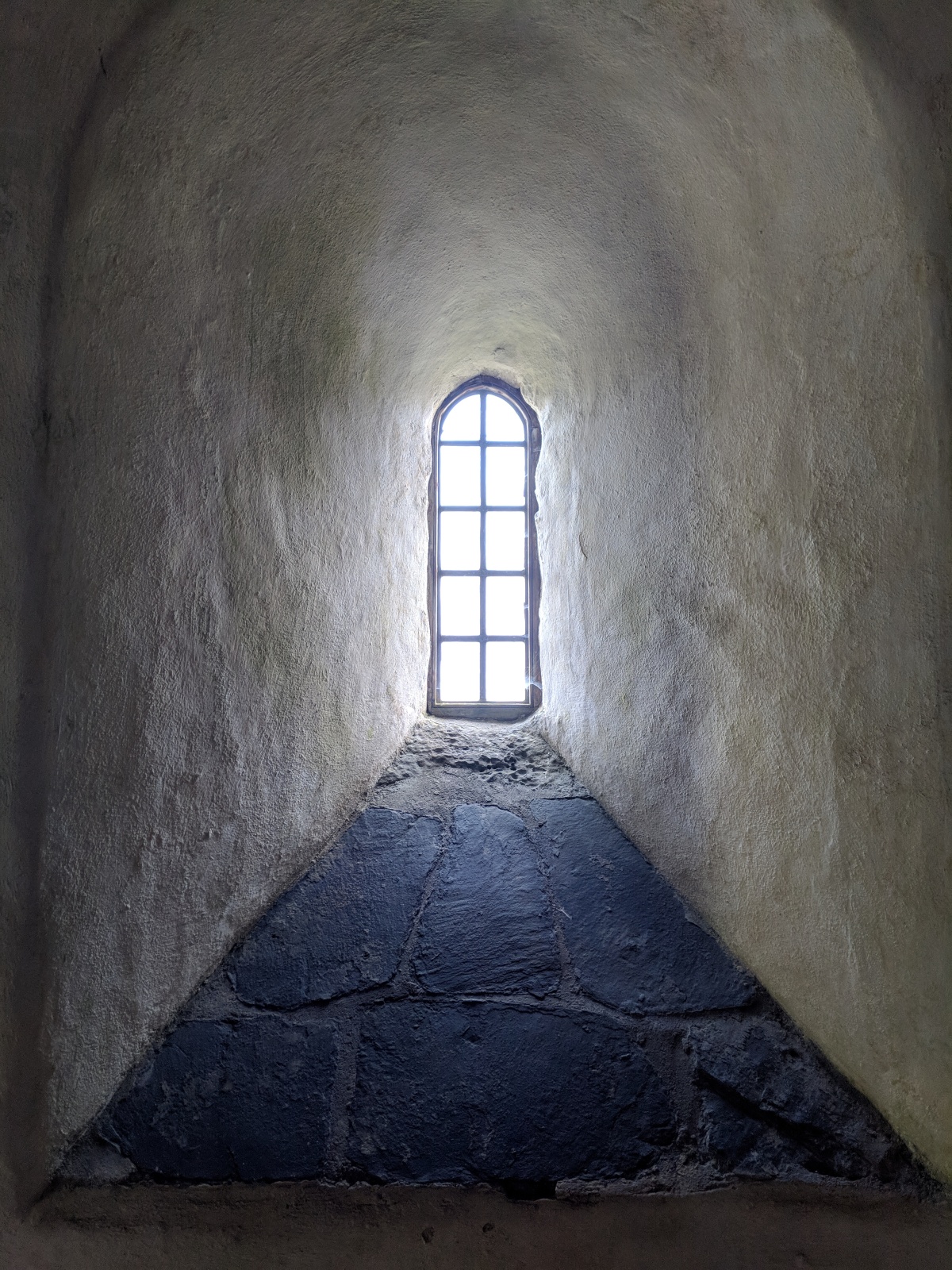 I delivered the following reflection at an Advent retreat I facilitated on Saturday, December 7th, 2019 at Trinity Episcopal Church, Fort Wayne, IN.

In western Scotland, there is an archipelago known as the Inner Hebrides—a collection of wild, sparsely populated islands that hug the coastline like an outcropping of jewels, ensconced in the swirling gray-green tides of the north Atlantic ocean. On a map, they appear easily accessible to the mainland, but to visit them is to enter a world apart.

The Inner Hebrides are home to wild birds—puffins, and rock doves, and golden eagles— and hardy, weather-beaten plants—heather, and thistle, and a host of insistent wildflowers. They contain small fishing villages and hillsides covered in roaming sheep, whiskey distilleries and ruined monasteries.  Some of the islands are vast and mountainous, a series of craggy cliffs and broad, low plains; others are barely a speck of gray rock, grazed by the wings of passing seabirds–namelessly residing amid the roiling waves.

But for all their remoteness, streams of travelers make their way to this cluster of islands, over 100,000 people each year. They come for a variety of reasons: for hiking, or fishing, or whiskey tasting, or perhaps for a bit of windswept solitude; but they come especially to visit one place in particular: the tiny island of Iona, perched at the outermost edge of the Inner Hebrides, accessible only by boat.

Iona is humble in size—only a mile wide and a few miles long, with a population of just 120 people—but it looms large in the imagination of many, for it was here that St. Columba arrived from Ireland in 563 CE and established a monastery that would become the center of what we now call Celtic Christianity—an ancient form of the faith, nourished in the misty hills and valleys of what is now Ireland and Scotland, and shaped by the cultures of their early people—a form of Christianity that long predates the establishment of a church in this region with any direct tie to the authorities in Rome.

It was here, on little Iona, at the rocky edge of the known world, that for centuries monks and scholars and warrior-kings traveled for an encounter with the living God, the One who came to be among us as Jesus, the Christ. It was here, at the edge of the sea, where they dwelt and prayed and studied and died, seeking some whisper of God’s voice in the wind and in the silence.

And so it is that, still, pilgrims go there, to visit the tiny village, and the crumbling ruins, and the reconstructed Abbey, and the ancient stone Celtic crosses with their inscrutable symbols. They travel by train, and then by boat, and then by bus, and then by boat again, to reach this holy place, this thin space, this island of craggy, rock-strewn grace because…because for some reason they must.

Iona has that effect on people.

Advent also has that effect on people.

Advent, as you might know, is derived from the Latin word adventus—it means “to come”—and so this liturgical season is the one in which we focus our attention on a very particular coming—that of Christ, whose birth is proclaimed on Christmas and whose return is promised at the end of the age.

And for the same reasons that some make the journey across the moors and the shores to seek out a tiny abbey church on a Scottish isle, to seek the presence of God in a wild land, so each of us ventured here, today, to seek out the importance of this season and what it means to “prepare the way” for the coming presence of Christ.

That phrase, “prepare the way,” the theme of our retreat today, is taken from tomorrow’s Gospel lesson from the third chapter of St. Matthew:

“In those days John the Baptist appeared in the wilderness of Judea, proclaiming, “Repent, for the kingdom of heaven has come near.” This is the one of whom the prophet Isaiah spoke when he said,

“The voice of one crying out in the wilderness:

‘Prepare the way of the Lord,

Now John wore clothing of camel’s hair with a leather belt around his waist, and his food was locusts and wild honey. Then the people of Jerusalem and all Judea were going out to him, and all the region along the Jordan, and they were baptized by him in the river Jordan, confessing their sins.

It is worth noting that John the Baptist, in his mission to proclaim the coming Messiah, does so in the wilderness, not in the city—he is wandering across the uninhabited landscapes of Judea, crying out his message of repentance and preparation.

Matthew tells us that it is the people of Jerusalem and all Judea who come to him, leaving behind the security of their homes to seek something of God in an unguarded landscape, to be baptized by a wild man in a wild river, to embrace a salvation that is spoken of as a cleansing, a burning, a harvesting—an elemental experience, undomesticated and savagely beautiful.

And like those Judeans, so we, too, venture beyond the familiar in Advent. We come here, not into a physical wilderness, but into the expansive, mysterious, silent heart of this season, a season whose core purpose is to instill in us a sense of Christ’s imminence, his urgent imminence—both in the form of a child, born unto us in a manger, and also in the form of a king, descending again one day in glory to judge and redeem creation at the end of all things.

We are drawn, like the Iona pilgrims, to stumble to the outer edge of the human heart, to gaze into the cloud-draped horizon and to be quiet, to listen, to watch for the One who is coming, like a wave, like a storm, like a still small voice speaking out of the whirlwind, surging over the coastline of our longings and carving them into his likeness, reshaping our hearts like stones polished by the sea. THY kingdom come, THY will be done.

Advent, it must be said, is not a season for the indifferent or the timid. If we go out to meet it, to answer its call, it will change us.

But what does all of this talk of wilderness and pilgrimage and change have to do with our gentle program today, focused on silence and prayer? Quite a bit, actually.

Because, you see, we spend our lives surrounded by noise; this is especially evident at this time of year, when the onslaught of saccharine commercialism joins forces with the pervasive noise of toxic online discourse, idle gossip, and media chatter to create a din that is, ultimately, numbing to the soul.

We careen from one task to another, often with very good intentions, and yet we are often left, at the end of the holiday season, with a sense of depletion and disorientation.

If Christ has indeed come into our midst through all of this, we run the risk of losing track of him, and thus we might end up cozy, perhaps well-fed and entertained, but unchanged. Untransformed. Untouched by the wonder of God, who gazes back at us through the eyes of an infant, who takes on our innocence and our frailty and imbues it with Divine Love, to show us how special, how good this life can be.

We need not travel to an island. Silence and prayer and Scripture are our pathway on this journey. They invite us into the presence of God and shape our lives as God’s people. They require us to notice everything, both inside of ourselves and in the world around us—the good and the bad—so that we can discern God’s abiding presence in all of it.

Because God is, indeed, present. God has come to us in the birth of Christ—the first Advent. God comes to us sacramentally in the Eucharistic life of the Church—the continuing Advent. And God will come again at the last day to redeem our turbulent history—the final Advent.

Our prayer and study, then, remind us not simply that “Jesus is the reason for the season” while blithely going about our frantic business as usual. Our prayer and study instead suggest that the season of Christ’s coming actually asks something of us—no, demands something of us—something that has nothing to do with consuming or producing, nothing to do with the further commodification of our love.

Advent requires, with its voice crying out in the wilderness, that we make space, that we clear out the noise and the haste, that we “prepare the way” in our hearts and in our societies for the cold, vivifying gust of salvation that will soon be borne on the wind, on the waves, on the breath of the One who approaches, toppling old injustices and healing old wounds.

The One whom John the Baptist proclaims. The One who, even now, hovers at the edge of our perception, like an island shrouded in mist, so close we can touch it, though we cannot quite see it, yet. The One who will make us, and our winter hearts, and our flagging, tired dreams, new again. The One who will bring us to life.

Today you are making a journey of your own—a journey to the edge—into the realm of Advent, where nothing is resolved and yet everything is possible. You do not have to achieve anything today. You are simply invited to make the trip, to pray, to listen to the silence and to yourself, and to one another.

Simply to do this is an act of courage, an act of pilgrimage. Simply to do this will help prepare the way for Jesus to enter your life more deeply. And when he comes—and he will come, as sure as the ebb and flow of the tide, a sure as the beating of your own heart—you will know that there is, ultimately, no wilderness in which you are alone. There is no distant shore where he cannot reach you. In Advent, he comes to us. In Advent, you will find that he is already here. 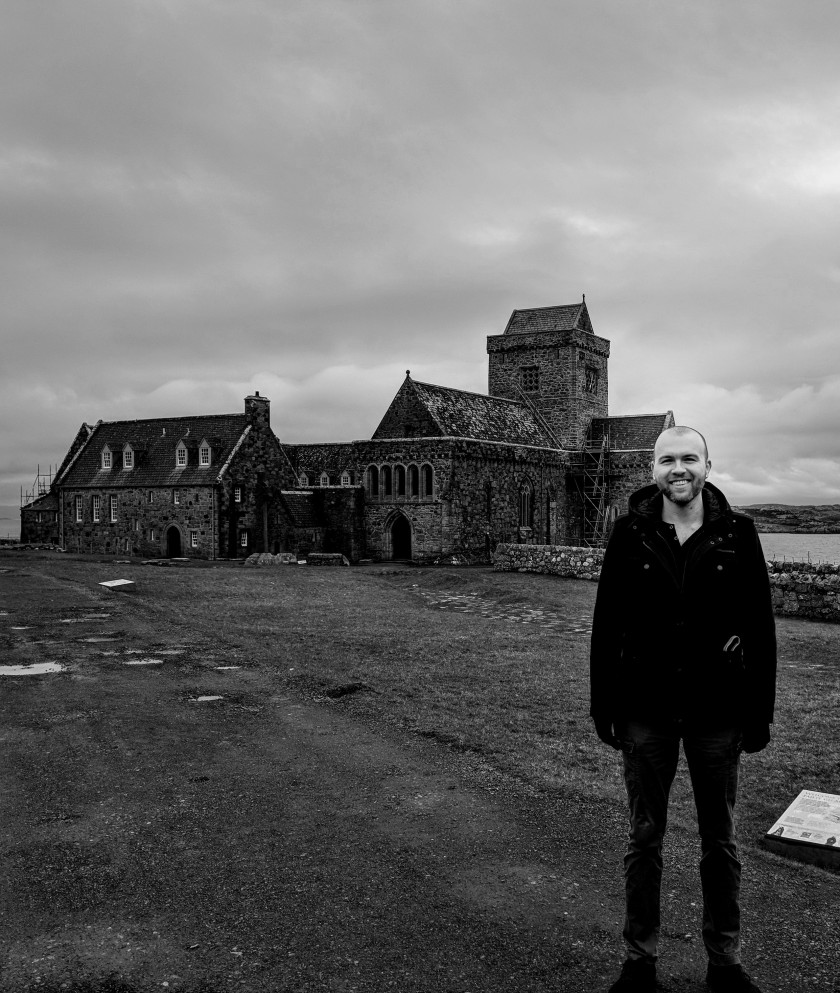