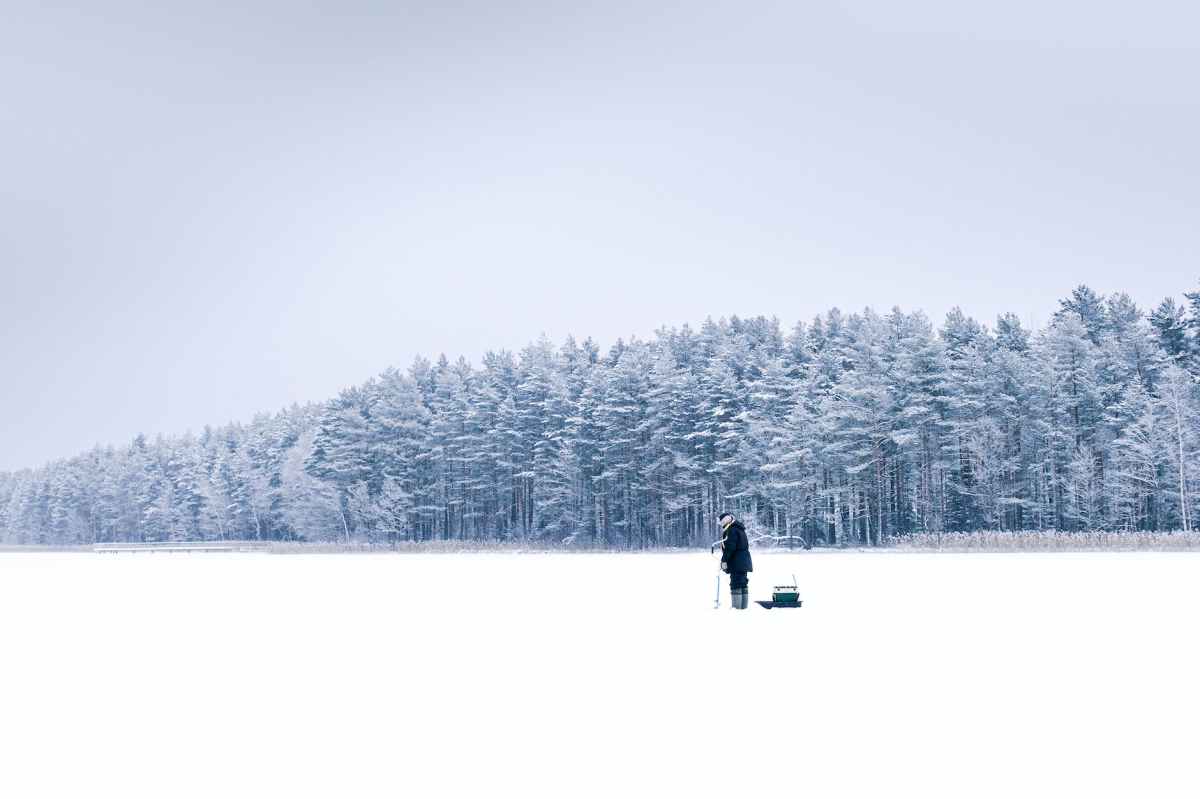 I preached this sermon on January 22, 2023 at Trinity Episcopal Church, Fort Wayne, IN. The lectionary text cited is Matthew 14:12-23.

And Jesus said to them, “Follow me, and I will make you fish for people.”

My grandpa, like any person born and raised in the Upper Peninsula of Michigan, loved to go fishing. And in particular he loved to go ice-fishing.

If you are not among the hardy (foolhardy?) souls who have tried this pastime, maybe you can still picture it: a frozen lake in the dead of winter, all sentient life wisely hibernating or hunkered down in a warm place. Except for the intrepid ice-fishers, who drag their shacks and their camp chairs out onto the quiet snow-blown expanse to drill holes in the ice and to sit—in bitter cold and in pensive expectation—waiting for a bite.

I confess, the few times I went out ice-fishing with my family as a kid, I didn’t get it. I was bored and restless—and cold! I didn’t understand why anyone would willingly do this for fun, especially when you could just get fish at the grocery store. But then, I was a kid who grew up mostly in cities and in California sunshine, and the lake water didn’t run in my veins like it did for my grandpa. The stoic beauty of the ice-fisherman’s reverie was lost on me.

He would sit out on the ice, munching on a sandwich, sipping coffee from a thermos, contemplating the tree line, the sky, maybe his place in the universe; I was never quite sure. Sometimes he’d catch something, often he wouldn’t. He never seemed to mind. And truth be told, I think he liked the ritual of the trip to the lake—its sensations and its silences—just as much, if not more so, than bringing home a catch.

Now you still aren’t likely to find me out on a frozen lake these days, but as I look back, I have come to appreciate not only the spare beauty my grandpa found in ice-fishing, but also how his going out onto the ice was, in many ways, an encapsulation of who he was in the rest of his life. The quiet and the deliberative spaciousness of ice fishing were the same qualities he evoked most other days, with his family and with his neighbors and friends.

He had his hot-tempered moments, but for the most part he moved through the world with a gentle attentiveness to things and to people: content to be who he was, where he was, patient, not obsessed with the elusive big catch of one sort or another that many of us chase after. Maybe he had always been that way. Or maybe all those years of ice-fishing helped make him that way. I’m not sure, but I do know that it was a part of him.

My grandpa and his ice-fishing have been on my mind this week, of course, because Jesus, in calling the first disciples, finds a handful of fishermen by the Sea of Galilee and invites them, in a clever turn of phrase, to “fish for people” instead. It’s a beloved scene in the Gospels, but oftentimes I think we focus so much on the abruptness of the disciples’ response—how they seem to drop everything and follow Jesus on the spot—that we don’t spend a lot of time pondering what they were doing beforehand: namely, their original vocation as fishermen. I wonder, though, why Jesus singles them out, these men on the shore, among all the other people he might have invited into his circle.

Was Jesus calling them just because they happened to be there, without regard for their previous life experience? Was he, in effect, asking them to become someone entirely new, or did he see some particular potential in these men with their nets and their boats and their weather-beaten faces?

Because I believe that who we are and what we have done with our lives, no matter how simple or quiet or humble, matters to God. It matters in the Kingdom of God.

In the same way that my grandpa’s ice fishing and the rest of his life seemed to mutually inform one another, perhaps these Galilean fishermen already had what Jesus needed them to have as future apostles. Maybe their decision to follow him, as dramatic and abrupt as it seems, was not, in fact, a clean break from their past. It was not a rejection of who they had been, a rinsing off of the smell of fish and mud, but an embrace of what these things had taught them—it was the decision to trust that their lives, their skills, and their gifts might be brought forth in a new way for the purposes of God.

And so those fisherman had the courage to follow him away from the shore because they knew that they had what they needed within them; they were already enough. And if that is so, then perhaps we have what we need, too, perhaps we are already enough for wherever God is calling us to go. Not running away from ourselves but going deeper into ourselves so that we might embody what God created us to be.

And I know all of us, myself included, have parts of ourselves, parts of our story, parts of our personality, parts of our past, that feel worthless, parts we would just as soon leave behind. The embarrassments that enmesh us in a net of shame. The regrets that linger on us like the scent of lake water. The things that prevent us from believing we have anything of value to offer.

But Jesus is standing there, seeing all of it, knowing all of it, and he is saying, yes, you. I’ve been looking for someone just like you. Follow me. Follow me as you are. Follow me with what you have, no matter how great or small. Fishermen, follow me. Tax collectors, follow me. Saints and sinners, follow me. The mighty and the lowly; the famous and the forgotten; everyone, follow me— for everyone is needed where we’re going. And all that you have been and known and done will be gathered in and it will be made purposeful, it will be made beautiful by my love. It will be more than enough.

That, in the end, is what I learned from my grandpa and how his quiet, patient days fishing on the ice spilled over into his quiet, patient life: to trust in the sufficiency of who you are; of what you love; of what you know. Trust it to guide you, with God’s help, into what you do not yet know. Trust that God is already at work in the small things of daily life, shaping you for the vast and timeless purposes that only God can truly understand.

And regardless of whether it is ice-fishing or mending nets on the shore of Galilee or raising your kids or caring for your neighbor or striving for your daily bread, whatever it is that has formed you into who you are today, trust that you are ready to respond when Jesus calls you. You are ready and able, not in spite of your life but because of it, because every life has potential, every one of us shimmers with the possibility of God’s glory, like ice glittering in the sun.

Follow me, Jesus says, and I will make you fish for people.